Home to many of the world’s greatest works of art, architecture and gastronomy, Italy elates, inspires and moves like no other.

Epicentre of the Roman Empire and birthplace of the Renaissance, this European virtuoso groans under the weight of its cultural cachet: it’s here that you’ll stand in the presence of Michelangelo’s David and Sistine Chapel frescoes, Botticelli’s Birth of Venus and Primavera and da Vinci’s The Last Supper. In fact, Italy has more Unesco World Heritage cultural sites than any other country on Earth. Should you walk in the footsteps of ancient Romans in Pompeii, revel in Ravenna’s glittering Byzantine treasures or get breathless over Giotto’s revolutionary frescoes in Padua? It’s a cultural conundrum as thrilling as it is overwhelming.

In few places do art and life intermingle so effortlessly. This may be the land of Dante, Titian and Verdi, but it’s also the home of Prada, Massimo Bottura and Renzo Piano. Beauty, style and flair furnish every aspect of daily life, from those immaculately knotted ties and seamless espressos to the flirtatious smiles of striking strangers. The root of Italian psychology is a dedication to living life well, and effortless as it may seem, driving that dedication is a reverence for the finer things. So slow down, style up and indulge in a little vita all’italiana (life, Italian style).

It might look like a boot, but food-obsessed Italy feels more like a decadently stuffed Christmas stocking. From delicate tagliatelle al ragù (pasta ribbons in a meat-based sauce) to velvety cannoli (crisp pastry shells filled with sweet ricotta), every bite can feel like a revelation. The secret: superlative ingredients and finely tuned know-how. And while Italy’s culinary soul might prefer simplicity, it’s equally ingenious and sophisticated. Expect some of the world’s top fine-dining destinations, from San Pellegrino ‘World’s Best 50’ hot spots to Michelin-starred musts. So whether you’re on a degustation odyssey in Modena, truffle hunting in Piedmont or swilling powerhouse reds in the Valpolicella wine region, prepare to loosen that belt.

Italy’s fortes extend beyond its galleries, wardrobes and dining rooms. The country is one of nature’s masterpieces, with extraordinary natural diversity matched by few. From the north’s icy Alps and glacial lakes to the south’s fiery craters and turquoise grottoes, this is a place for doing as well as seeing. One day you’re tearing down Courmayeur’s powdery slopes, the next you could be galloping across the marshes of the Maremma, or diving in coral-studded Campanian waters. Not bad for a country not much bigger than Arizona.

You can change other currencies into Euros almost anywhere in Italy. Perhaps the safest place, however, is in a bank where you will most likely pay a flat rate as a commission independent of the amount of Euros you are changing. The Italian Post Offices also provide a currency exchange service and their commission rates are quite competitive sometimes even lower than the ones charged at banks. In bigger towns and tourist locations, you will also find private exchange bureaus which will often offer to exchange currency without commission; however the exchange rate will very likely not be the most favorable.

Even though Debit and Credit cards are accepted in most places in Italy, cash is still king in Italy and is the preferred method of payment! If you are ever in doubt whether a place accepts plastic, look whether the credit card logos are displayed in the front window of the establishment. Beware that taxis will generally accept cash only. There are some taxis that are set up to accept credit cards but they still prefer cash payments as they pay high bank charges for the transactions. If in doubt, ask whether you can pay by card before you start your journey. It is always advisable to check with your card provider in advance of the exact fees they will charge you for any foreign transactions you make as these may stack up.

ATMs in Italy are known as Bancomat and you can use them to withdraw cash in euros from your account just as you would do at home. Just make sure that the ATM is marked with the affiliations you need (cirrus, plus, etc.). Note that the maximum withdrawal limit at most Italian Bancomats is set to 250 Euros per day.

One of the world’s most revered cuisines, Italian food is a handy umbrella term for the country’s cache of regional cuisines. Together they reflect Italy’s extraordinary geographic and cultural diversity. The common thread between all is an indelible link between food and the locals’ sense of identity. From the quality of the produce to the reverence for tradition, eating here is all about passion, pride and godere la vita (enjoying life).

Italy has no shortage of eating options, and reserving a table on the day of your meal is usually fine. Top-end restaurants may need to be booked a month or more in advance, while popular eateries in tourist areas should be booked at least a few days ahead in peak season.

Osteria Similar to a trattoria, with a focus on traditional cooking.

Traditional Italian menus have five sections. A full meal usually consists of an appetizer, first course, and ​a second course with a side dish. It’s not necessary to order from every course, but usually, people order at least two courses. Traditional meals may last one or two hours or even longer. Italians often go out for a long Sunday lunch with their families and restaurants will be lively. It’s a good chance to experience Italian culture.

Antipasti come before the main meal. One choice will usually be a plate of the local cold cuts and there will probably be some regional specialties. Sometimes you can order an antipasto misto and get a variety of dishes. This is usually fun and can be more food than you’d expect for the price! In the south, there are some restaurants that have an antipasto buffet where you can select your own appetizers.

The first course is pasta, soup, or risotto (rice dishes, especially found in the north). Usually, there are several pasta choices. Italian pasta dishes may have less sauce than Americans are usually used to. In Italy, the type of pasta is often more important than the sauce. Some risotto dishes may say a minimum of 2 persons.

The Second or Main Course – Secondo

The second course is usually meat, poultry, or fish. It doesn’t usually include any potato or vegetable. There are sometimes one or two vegetarian offerings, although if they are not on the menu you can usually ask for a vegetarian dish.

The Side Dishes – Contorni

Usually, you will want to order a side dish with your main course. This could be a vegetable (verdura), potato, or insalata (salad). Some prefer to order only a salad instead of the meat course.

Most Italians drink wine, vino, and mineral water, acqua minerale, with their meal. Often the waiter will take the drink order before your food order. There may be a house wine that can be ordered by the quarter, half, or full liter and will not cost much. Coffee is not served until after the meal, and iced tea is rarely served either. If you do have ice tea or soda, there will not be free refills.

Tipping in Italy can be confusing because a tip may already be included in the bill, and anything beyond that is considered a bonus. There is, however, a time and place for tipping in Italy. … There is no set-in-stone rule for Italy tipping. It is solely up to you how much you leave in addition to the final bill, but do try to tip in cash versus on a credit card to ensure the server actually gets the tip.

In Italy, there are different types of climate: mild continental in the Po Valley, cold in the Alps, Mediterranean on coasts and islands, and finally, cool and windy in the Apennines. July and August are the hottest and sunniest months, except in the Alpine region, where thunderstorms in the afternoon are quite frequent.

The best time to visit the main Italian cities is the spring: from mid-April to late May, temperatures are pleasant, the days are quite long, the sun often shines and nature is in bloom, though sometimes it can rain. Another good period is the first half of September. Between mid-September and mid-October, the temperatures are pleasantly warm, but it can rain, especially in the north and center of the country. November is typically a rainy month throughout Italy, even though the sun still shines quite often in the south. In early spring, from March to mid-April, the weather can be sunny and mild, but also cold and wet: it’s a fairly unstable period.
Summer, from June to August, is often sunny, but it can be very hot, especially in July and August. However, visitors flock to cities like Rome and Florence even in this period. In any case, it is better to warn those who don’t like the heat.
Summer is a good period to visit the Alpine area and to go hiking in the mountains.
In February and the first half of March, there is almost always enough snow for a ski holiday, and the days are longer than in December.
July and August are the best months for a beach holiday in northern and central Italy, and also September in the south. In June, the weather is often nice and the days are the longest of the year, but as mentioned, the sea can still be a bit cool.

Italy is 1 hour ahead of Greenwich Time Zone

220 Volts, 50 Hertz. A variety of plugs can be used in this country including the two-pin plug, which is common all across Europe.

Christian 80% (overwhelmingly Roman Catholic with very small groups of Jehovah’s Witnesses and Protestants), Muslim (about 800,000 to 1 million), atheist and agnostic 20%. 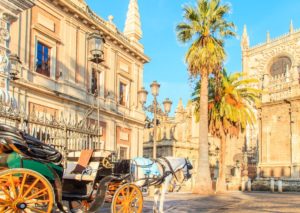