Is grandeur on the Danube

Hungary’s scenery is more gentle than striking. But you can’t say the same thing about the built environment across the land. Architecturally Hungary is a treasure trove, with everything from Roman ruins and medieval townhouses to baroque churches, neoclassical public buildings and art nouveau bathhouses and schools. And we’re not just talking about its capital, Budapest. Walk through Szeged or Kecskemét, Debrecen or Sopron and you’ll discover an architectural gem at virtually every turn. Indeed, some people go out of their way for another glimpse of their favourites, such as the Reök Palace in Szeged or the Mosque Church in Pécs.

Hungarians have been ‘taking the waters’ supplied by an estimated 300 thermal springs since togas were all the rage and Aquincum was the Big Smoke. They still do – for therapeutic, medicinal and recreational purposes – but the venues have changed somewhat. Today they range from authentic bathhouses dating from the Turkish occupation and art nouveau palaces to clinical sanatoriums straight out of a Thomas Mann novel. More and more though, you’ll see clear chlorinated waters in organically shaped pools that bubble, squirt and spurt at different rhythms and temperatures alongside requisite wellness centres offering a myriad of treatments.

Hungarian food remains the most sophisticated style of cooking in Eastern Europe. Magyars even go so far as to say there are three essential world cuisines: French, Chinese and their own. That may be a bit of an exaggeration, but Hungary’s reputation as a food centre dates largely from the late 19th century and the first half of the 20th and, despite a fallow period under communism, their cuisine is once again commanding attention. So too are the nation’s world-renowned wines – from the big-bodied reds of Eger and Villány and white olaszrizling from Badacsony to honey-sweet Tokaj.

Hungary has one of the richest folk traditions still alive in Europe. With exquisite folk paintings found on the walls and ceilings of the tiny wooden churches of the Bereg region and the wonderful embroidery that the women of Hollókő stitch to decorate smocks, skirts and slippers, this is often where the country comes to the fore artistically. Traditional music, played on a five-tone diatonic scale on a host of unusual instruments, continues to thrive as well, especially at táncházak (‘dance houses’) – peasant ‘raves’ where you’ll hear Hungarian folk music and to learn to dance too.

You’ll often find that Budapest is a bargain compared to other European cities, because although Hungary is part of the European Union, it does not use the Euro as its currency. The Hungarian currency is the Forint (Ft, HUF), which has the following denominations: notes – 500Ft, 1,000Ft, 2,000Ft, 5,000Ft, 10,000Ft and 20,000Ft; coins – 5Ft, 10Ft, 20Ft, 50Ft and 100Ft. Prices, such as hotel rates, sightseeing tours, etc. are often quoted in Euros. Many businesses, even including some select supermarkets accept Euros. Don’t forget to check their exchange rates, as you might be better off exchanging your currency first and paying in Forints.

Hungarians are especially passionate about their stews, roasted pork, breads, pastries, beef, poultry, lamb, and game, as well as the paprika, a quintessential spice and pepper used prominently in many Hungarian dishes. The mixing of different varieties of meats is a traditional feature of Hungarian cuisine. Goulash, stuffed peppers, cabbage rolls, and Fatányéros (Hungarian mixed grill on a wooden platter) are all dishes that can combine beef and pork, and sometimes mutton. Goulash (Hungarian: gulyásleves) is essentially a soup-like stew using meat with bones, paprika, caraway, vegetables (typically carrots and parsley root), other spices, and potatoes or various tiny dumplings or pasta (such as csipetke) simmered with the meat. Other famous Hungarian meat stews include paprikás, a thicker stew with meat simmered in thick, creamy, paprika-flavored gravy, and pörkölt, a flavorful Hungarian stew with boneless meat (usually beef or pork), onion, and sweet paprika powder, both served with nokedlior galuska (small dumplings). In old-fashioned dishes, fruits such as plums and apricots are cooked with meat or in piquant sauces/stuffings for game, roasts and other cuts. Various kinds of noodles, dumplings, potatoes, and rice are commonly served as a side dish. Hungarian dry sausages (kolbász) and winter salami are also an integral part of Hungarian cuisine.

Other characteristics of Hungarian cuisine are the soups, casseroles, desserts, and pastries and stuffed crêpes (palacsinta), with fierce rivalries between regional variations on the same dish (such as the Hungarian hot fish soup called fisherman’s soupor halászlé, cooked differently on the banks of Hungary’s two main rivers: the Danube and the Tisza), palacsinta (pancakes served flambéed in dark chocolate sauce filled with ground walnuts) and Dobos Cake (layered sponge cake, with chocolate buttercream filling and topped with a thin slice of caramel).

Two remarkable elements of Hungarian cuisine that are hardly noticed by locals, but usually elicit much enthusiasm from foreigners, are the different forms of vegetable stews called főzelék as well as cold fruit soups, such as cold sour cherry soup (Hungarian: hideg meggyleves).

Hungarian cuisine uses a large variety of cheeses, but the most common are túró (a type of quark), cream cheeses, ewe-cheese (juhturó), Emmentaler, Edam and the Hungarian cheeses Trappista, Pálpusztai, and Pannonia cheese.

Tipping is very widespread in Hungary, so it is a good idea to stock up on coins as they will help you get through the day. You should expect to tip at hotels, restaurants and spas but that’s not it. Many venues have door and bathroom attendants who expect a gratuity of at least Ft 100. You should also leave some money for your taxi driver and your hairdresser. How much you tip depends on the service and how happy you are. This guide will tell you everything you need to know.

Hungary’s weather can be extremely harsh in terms of coldness. But in general, the climate in Hungary is a moderate one with warm and quite long summers and winters that are cold. You really can’t pick a particular time when you can say that the weather is always perfect.

Hungary’s climate is temperate, and the country can be divided into three climatic zones: Mediterranean in a small, southern region, Continental in the east, and Atlantic in the west.

Keep the variations of the climate in Hungary in mind whenever you plan a trip so that you are able to enjoy your vacation.

The climate in the South-East of Hungary is very different from the climate of Northern and Western Hungary and is similar to the climate of the Mediterranean. In general, winters in the south of Hungary are short, never beginning before November and the temperatures rarely drop below 0°C.

May, June and November are the rainiest months in Hungary, with the West and Southwest receiving more rain than the East. July and August are the hottest months and nearly without rain. The climate Hungary during the winter months is freezing and some rain can be expected all through the year.

As far as Budapest is concerned, it has a transitional, changeable climate because it is caught between two weather systems: Eastern European Continental and Western European Oceanic. September is a good time to be there, being warm and pleasant, with a maximum temperature of 22-25°C.

Hungary is best visited over the summer period between May and September, when the weather is warmer and there’s lots of sunshine – and the attractions are all open. Warm weather generally lingers through September and October.

The weather in spring and autumn can also be very pleasant, but temperatures can drop to around 9°C (20°F). Spring in the west of Hungary begins some time in April when the weather starts to warm up and brings with it a rainy period. (though in Hungary, the weather can be pretty wet in the month of May and June too).

Maximum and minimum temperatures are about 38°C (100°F) in the summer and -29°C (-20°F) in the winter. August is the hottest month (average temperature 21°C) and January the coldest (average -2°C). On some very chilly winter days temperature can fall to 10-20°C below zero, especially in the hills, while in the middle of summer temperatures around 30-35°C during the day are not unusual.

Hungary is 2 hours ahead of Greenwich Meant Time

220-240V. Sockets are of European two-pronged round pin variety.

Note: shares sum to more than 100% because some respondents gave more than one answer on the census; Hungarian is the mother tongue of 98.9% of Hungarian speakers 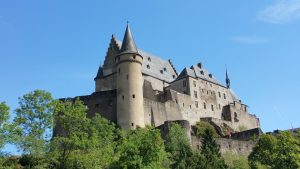 Welcome to the heart of Europe & appreciate the variety Europe has to offer. From bustling cities to charming countryside, journey to medieval castles by